In an attempt to better tell the story of my most recent work trips, I used a couple of new (to me) web tools. First, I used the My Maps feature on Google Maps to create a storyboard of my journey (with my coworker and friend, Andrew) around Cape Canaveral Air Force Base looking for the Apollo I launch pad. Next, I used Zooomr to create a couple of picture boards that allow you to see a more detailed image by hovering over or clicking on 'portals' in the image. These things are described in more detail in the Life Blog (first entry & second entry) or you can look directly at the Google My Map and the Zooomr pictures of the Vehicle Assembly Building and Mercury Monument. Sorry if they don't work for IE users, I'm not sure why I had trouble.

I haven't made any progress on the headboard in close to a month. The combination of rain and other activities has really slowed me down. I hoped to work on it today but I'm not sure I will because of the rain again. It's not that I can't work in the rain, but it isn't particularly pleasant. Anyway, I thought I'd put out a brief update on what I've got so far. I updated the design slightly to avoid the baseboards and to allow us to add crown molding later if we want. I also made my plans more detailed as you can see in the picture. 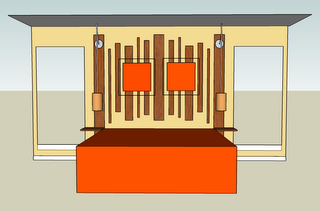 The previous picture didn't even show the tables which I have completed building. They are 14 inch squares made from four pieces of oak. Just for these little pieces, I used a planer, miter saw, jointer, biscuit joiner, and sander. They turned out looking great; I just have to figure out how to attach them now. 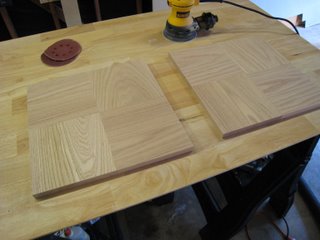 And last but not least, I've already put up most of the boards. Compared to the two that are left, these were fairly easy but it did take some time to get them up there straight and evenly spaced. I used keyholes in the backs of the boards placed so that I just needed to get two level rows of screws in the wall with the correct spacing. It took some time and diligence but worked perfectly. 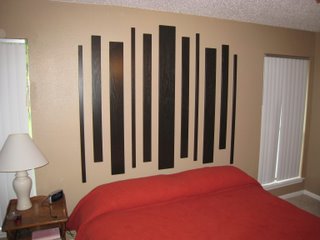