I've been wanting to setup our desktop computer to act kind of like a server for the laptop. Basically, we'll store all important data on the desktop and the laptop will access it through the network and use Windows' offline folders capability to make sure the laptop also has a local copy. I figured that before switching to this approach, I would change my current setup of 2 independent serial ATA (SATA) hard drives into a mirrored set (RAID 1) which provides automatic backup of data in case of a hard drive failure.

Sounds simple enough...I found a cheap PCI card (from Rosewill) that supports SATA RAID and tried to install it. As Windows is booting, I got a blue screen and then an automatic restart. It didn't even give me time to read the data on the blue screen. I tried everything I could think of to get it working without success and the best part is that when I returned everything to the original configuration, Windows still wouldn't boot properly. It took several attempts and the painstaking process of reloading Windows including all patches before I could successfully restore my backup. So a week later, I'm back where I started!

It appears that all of the reasonably priced cards use the same RAID chip so I'm not confident that just trying a different card will help me and I can't upgrade my motherboard without replacing a bunch of other components...so, I'm still trying to figure out my next step. I'm open to suggestions.

Email ThisBlogThis!Share to TwitterShare to FacebookShare to Pinterest
Labels: computer 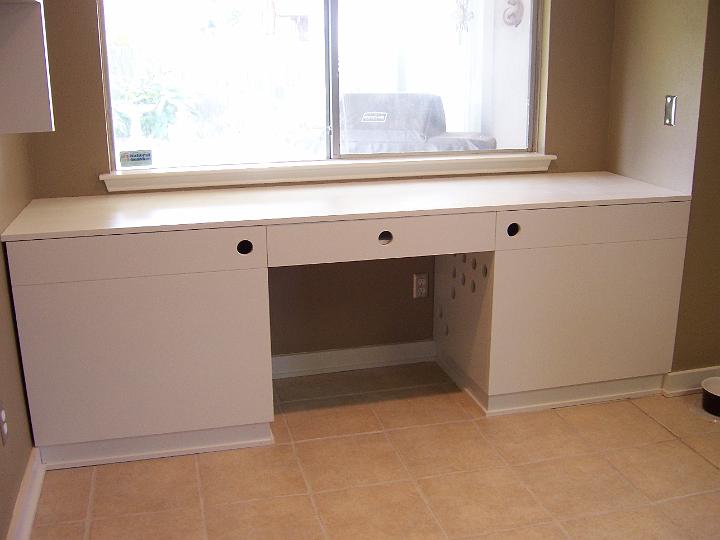 Well...not quite but it is starting to look like it. The top, doors, keyboard drawer, and baseboard have all been installed since the last time I posted a picture. The top hasn't actually been secured yet because we are going to take it and have glass or acrylic cut to fit to protect the top. I'm leaning toward acrylic because it will be easier to work with, can be really thin, and is cheap but it will depend on what the edge finishes look like. We are also going to be cutting at least one hole in the top for monitor cables. We have discussed cutting several holes to make it a design feature. The baseboard needs to be touched up where the nail holes are and I've still got a few more drawers to do but it is coming along.

I worked on the desk a lot last weekend and E did some painting. We got the doors finished and the top is currently being painted. Sorry, I'm too lazy to go take pictures right now but I just wanted to let you know that progress is being made. I expect it to look finished by the end of the coming weekend. It still won't have some of the innards though.
Posted by Ross at 8:14 PM 0 comments